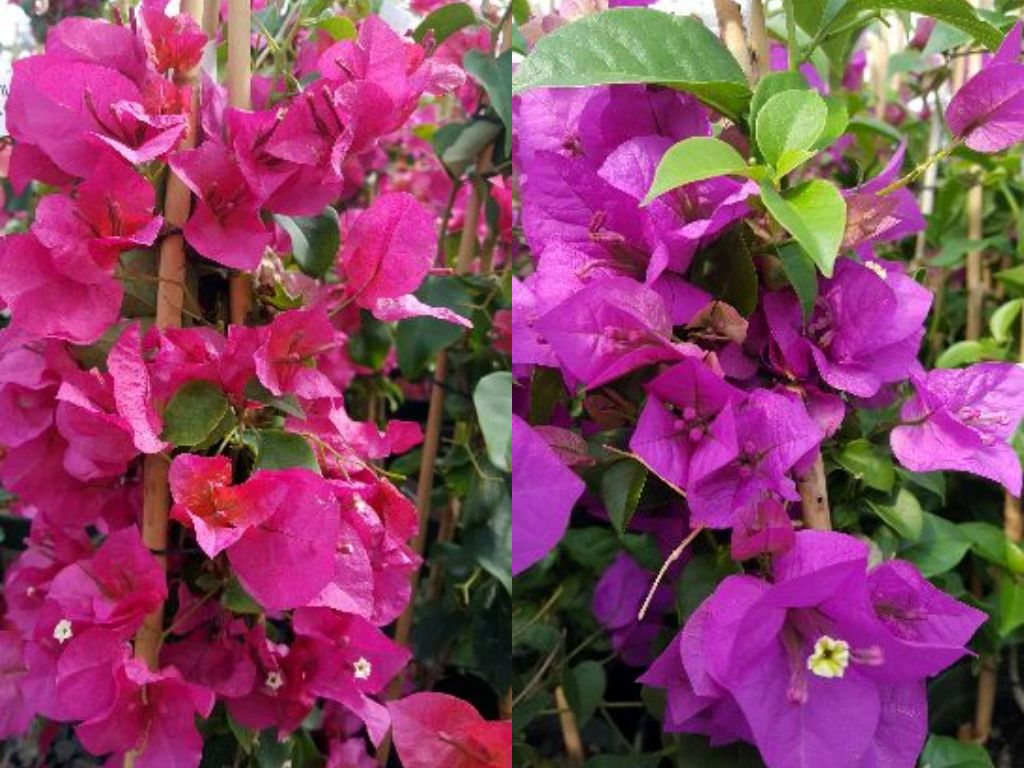 We know it’s finally spring here at Kato’s when our shipment of Bougainvillea arrives!

Bougainvillea is a hardy tropical vine that grows in areas where winter temperatures remain above 30 degrees F. (-1 C.). The plant usually produces three rounds of vibrant blooms in spring, summer and autumn. If you don’t have growing space or live in a suitable climate, you can plant bougainvillea in a pot. If you live in a chilly climate, bring potted bougainvillea plants indoors before the first frost.

Bougainvillea are tropical plants generally grown for their brilliant and generous flowers. These plants thrive outdoors in warm temperatures and direct sun as long as they get adequate irrigation.

A native to coastal Brazil, the bougainvillea was discovered in 1768 in Rio de Janeiro by French naturalist Dr. Philibert Commerçon. The plant is named after his close friend and ship’s admiral Louis-Antoine de Bougainville, who commanded the ship La Boudeuse that sailed around the world between 1766-1769, and in which Commerçon was a passenger.

Twenty years after Commerçon’s discovery, it was first published as ‘Buginvillea’ in Genera Plantarium by A.L. de Jusseau in 1789. The genus was afterwards split in several ways until it was finally corrected to ‘Bougainvillea’ in the Index Kewensis in the 1930s. Originally, B. spectabilis and B. glabra were hardly distinguished from one another until the mid 1980s when botanists recognized them to be totally distinct species. In early 19th century, the two species B spectabilis and B. glabra were introduced into Europe, and soon, nurseries in France and England did a booming trade offering specimens to Australia and other faraway countries. In the meantime, Kew Gardens distributed plants it had propagated to British colonies all over the world. Soon afterwards, an important event in the history of bougainvillea took place with the discovery of a crimson bougainvillea in Cartagena, a Spanish port in the Mediterranean, by Mrs. R.V. Butt. Initially thought to be a different species, it was named B. buttiana in her honour. However, it was later discovered to be a natural hybrid of a variety of B. glabra and possibly B. peruviana – a “local pink bougainvillea” from Peru. Natural hybrids were soon found all over the world.

Bougainvillea performs well in a relatively small container where its roots are slightly restricted. When the plant is large enough for repotting, move it to a container only one size larger. Use a regular potting soil without a lot of peat moss. Too much peat retains moisture and may result in root rot. Any container used for growing bougainvillea must have at least one drainage hole. Install a trellis or support at planting time; installing one later may damage the roots.

Water a newly potted bougainvillea often to keep the soil moist. Once the plant is established, it blooms best if the soil is a little on the dry side. Water the plant until liquid drips through the drainage hole, and then don’t water again until the soil feels slightly dry. However, don’t allow the plant to completely dry out because a water-stressed plant won’t bloom. Water the plant immediately if it looks wilted. Bougainvillea is a heavy feeder and requires regular fertilization to produce blooms throughout the growing season. Use a water-soluble fertilizer mixed at half strength every seven to 14 days, or apply a slow-release fertilizer in spring and midsummer. Bougainvillea blooms on new growth. This means you can prune the plant as needed to maintain the desired size. The ideal time to trim the plant is immediately following a flush of blooms.

A blooming period of several weeks when little or no vegetative growth will occurs. The length of time they will display color is dependent upon the health of the plant and the environment they are in; the more sun and heat, the better. With at least 5 hours of direct sunlight per day, a typical, healthy bougainvillea will remain in a blooming period for 3 to 5 weeks.

Bougainvillea’s natural habitat is equatorial where day and night lengths are almost the same. Bougainvillea in equatorial areas tend to bloom year round, but in North America, the best flowering occurs when the night length and day length are almost equal (in spring or Fall). If you live in the north, it’s too cold to grow bougainvillea in the fall. So depending on which continent or area where you live, it may not be the ideal blooming season for your region. Just because it’s hot doesn’t necessarily mean that it’s flowering season for bougainvillea. For instance, bougainvillea does not bloom well in Southern Florida during the summer months because of the long days and excessive rainfall. The coolest months of the year (October through March) have the maximum show of bougainvillea.

For bougainvillea in pots, they can be over wintered in basements, garages, or other cool and lower light areas. In these types of environments they go into a state of dormancy and defoliate. Occasional watering during this period (once or twice a month) is required until they start to grow again in the spring where they again need to be moved into high light. The other possibility is not to force them into a dormancy state, and place them indoors on a sunny south facing windowsill. You will have to water them more regularly, about as frequently as a houseplant. You may see a bloom or two occasionally appear, but more likely than not, it will look like a common green houseplant until spring when you can place it outdoors again.

After you bring it back outdoors in the spring, cut back any dead or damaged branches, and begin watering and fertilizing again. Gradually boost light intensities by placing in partial shade for the first few days and working up to direct sunlight by the second week.

A moderately-vigorous large evergreen vine with dull dark green broadly-ovate pointed leaves. It produces its magenta red bracts all along the entire length of its stems in multiple flushes over a very long season from late spring through fall. Plant in full sun to bring out the bright color of the bracts. This is the best flowering of the large Bougainvillea in the Santa Barbara area. ‘Barbara Karst’ is similar to the cultivar ‘San Diego Red’ ( ‘Scarlet O’Hara’), which has larger leaves and fewer but larger orange-red blooms in clusters.

Giant, rich, deep purple, petal-like bracts are displayed against handsome, deep green foliage. ‘Purple Queen’ has a wonderful compact, upright and spreading form that works well in planter boxes, and containers. It is evergreen in frost-free areas and useful as a colorful annual in cooler northern zones.