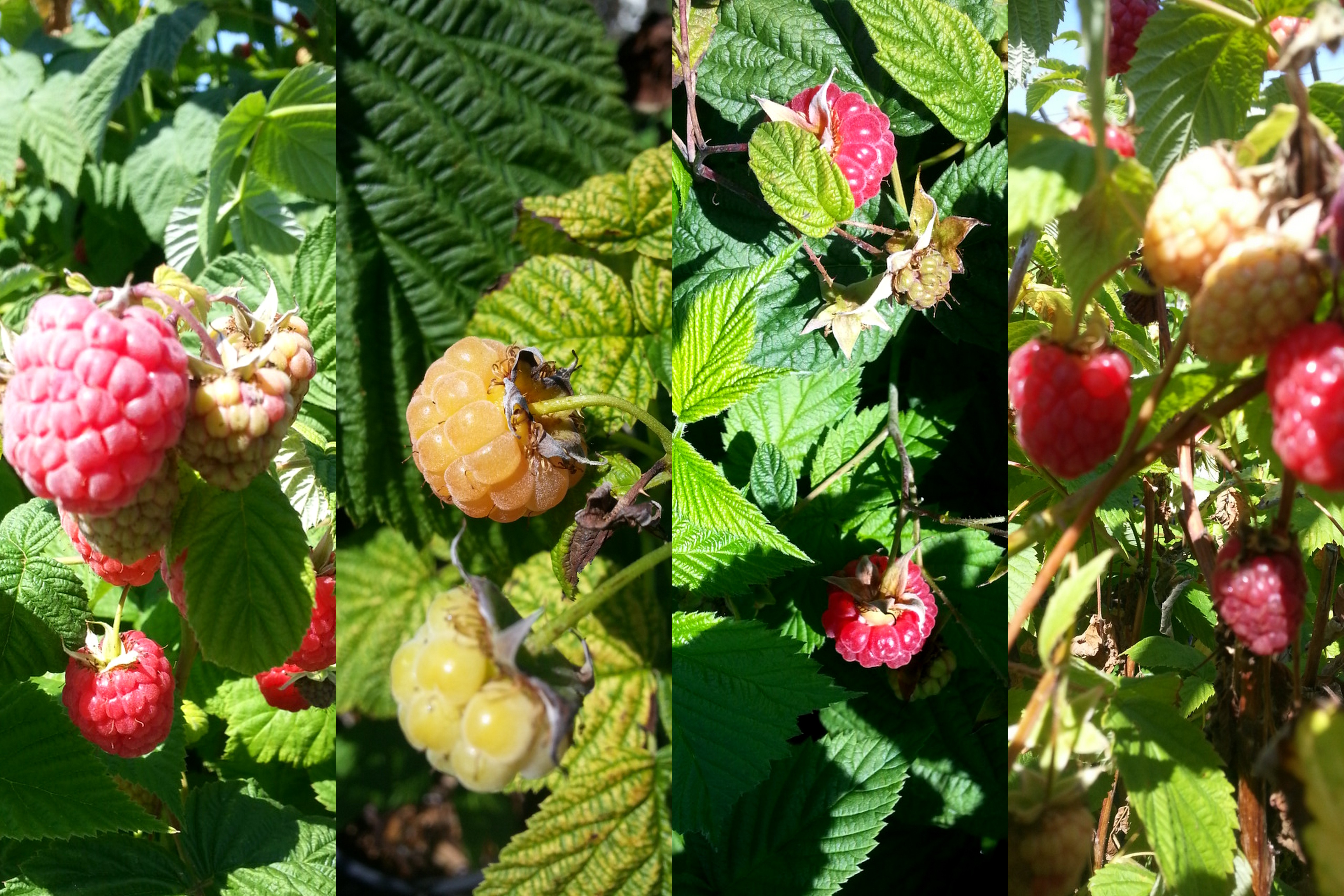 This blog is about the genus Rubus and mainly about the widely cultivated Eurasian red raspberry Rubus ideaus and the eastern North American black raspberry, Rubus occidentalis.

The raspberry is the edible fruit of a multitude of plant species in the genus Rubus in the rose family. Raspberries are a woody stemmed perennial.

Raspberry gets its name from raspise, “a sweet rose-colored wine” (mid-15th century).

The flowers can be a major nectar source for honeybees and other pollinators.

Raspberries are very vigorous and can be locally invasive. They propagate using basal shoots or suckers, extended underground shoots that develop roots and individual plants. They can sucker new canes some distance from the main plant. For this reason, raspberries spread well, and can readily take over gardens if left unrestrained. Raspberries are often propagated using cuttings, and will root readily in moist soil conditions.

The fruit is harvested when it comes off the receptacle easily and has turned a deep color (red, black, purple, or golden yellow, depending on the species and cultivar). This is when the fruits are ripest and sweetest. Excess fruit can be made into raspberry jam/jelly or frozen. 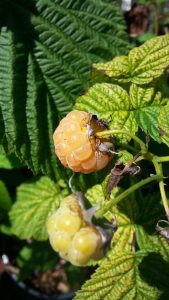 Fruits of a Fall Gold raspberry

Raspberries are an important commercial fruit crop, extensively grown in all temperate areas of the world.

Many of the most important modern commercial red raspberry cultivars originate from hybrids between R. idaeus and R. strigosus. Modern breeding has resulted in cultivars that are thornless and more strongly upright, not needing staking.

The black raspberry, Rubus occidentalis, is also cultivated, providing both fresh and frozen fruit, as well as jams, preserves, and other products, all with that species’ distinctive flavor.

Red raspberries have also been crossed with various species in other subgenera of the genus Rubus, bringing about a number of hybrids, the first of which was the loganberry. Later prominent hybrids include boysenberry, and tayberry.

Two types of raspberries are available for commercial and home garden cultivation; the summer-bearing type produces an abundance of fruit on second-year canes (flor canes) during a fairly short period in midsummer, and double or “everbearing” plants, which also bear some fruit on first-year canes (primocanes) in the late summer and fall, as well as the summer crop on second-year canes.

Raspberries are occasionally eaten by the larvae of some butterfly and moth species species. Botrytis cinerea, or gray mold, is a common fungal infection of raspberries and other soft fruit under wet conditions. It is seen as a gray mold growing on the raspberries, and particularly affects fruit which are bruised, as it provides an easy entrance point for the spores.

Raspberry plants should not be planted where potatoes, tomatoes, peppers, eggplants, or bulbs have previously been grown, without prior fumigation of the soil. These crops are hosts for the disease Verticillium wilt, a fungus that can stay in the soil for many years and can infect the raspberry crop.