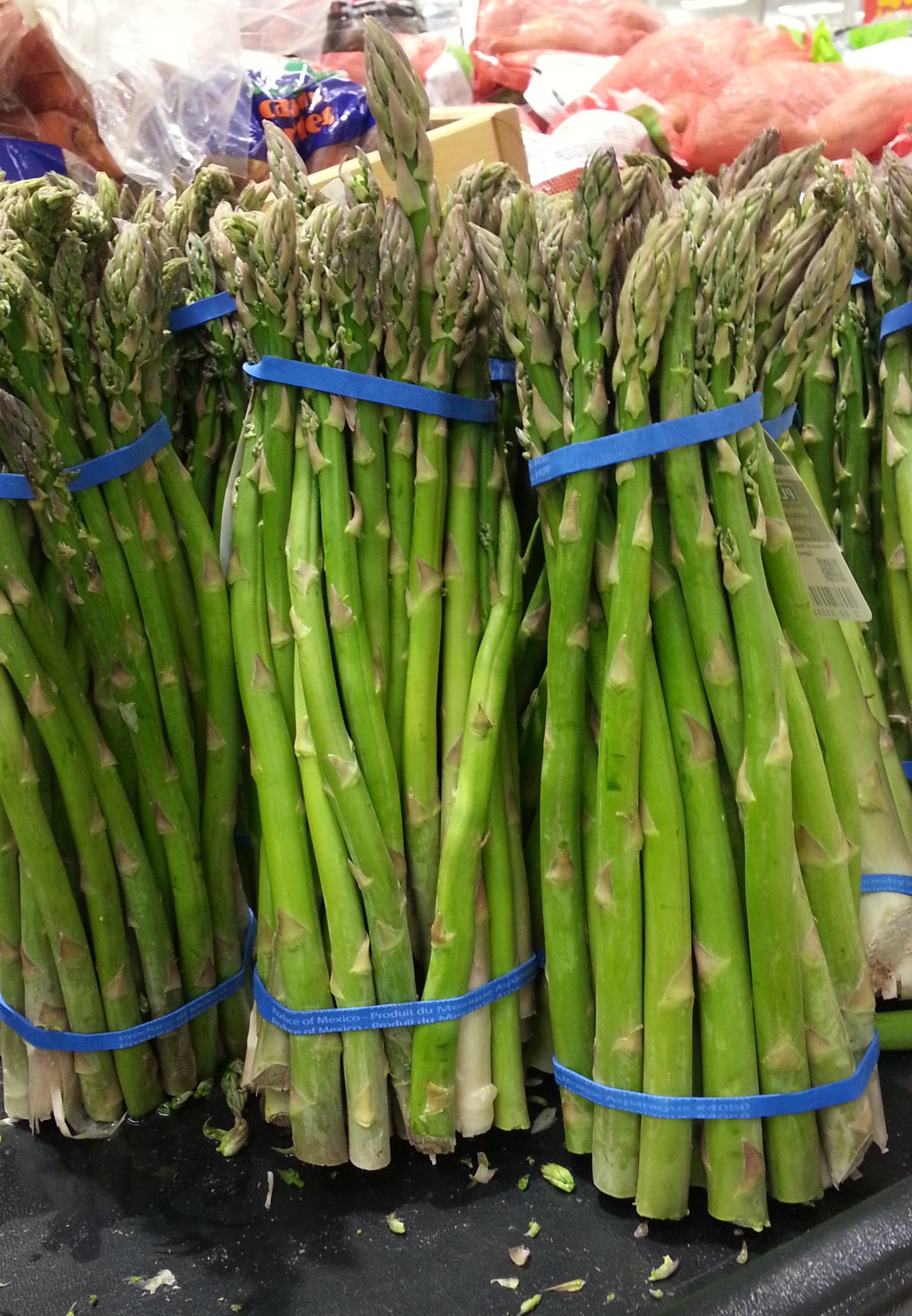 Labour-intensive to grow, asparagus are the young shoots of a cultivated lily plant. They’re considered to be one of the delicacies of the vegetable world, with a price tag to match, and have a distinct, intense savory flavour.

Asparagus is a herbaceous, perennial plant growing to 100–150 cm (39–59 in) tall, with stout stems with much-branched, feathery foliage. Asparagus is a stem vegetable with a young edible shoot that grows out from an underground stem or rhizome that can produce asparagus for 15 to 20 years. Asparagus is picked in the spring while it is soft, fleshy and 15 to 20 cms long.

It was once classified in the lily family, like the related Allium species, onions and garlic the Liliaceae family have been split and the onion-like plants are now in the family Amaryllidaceaee and asparagus in the Asparagaceae. Asparagus officinalis is native to most of Europe, northern Africa and western Asia, and is widely cultivated as a vegetable crop.

Asparagus has been used as a medicine and vegetable, owing to its delicate flavour, diuretic properties, and more. In ancient times it was eaten fresh and dried and the epicurius Romans even froze it high in the Alps for the feast of Epicurus.

After the Roman Empire ended asparagus drew little attention during medieval times. By 1469 it was being cultivated in French monasteries.

The strongest and most delicate flavor as well as the finest texture is in the tips. The points d’amour (“love tips”) were served as a delicacy in France. Asparagus became available in the Americas around 1850.

Only young asparagus shoots are commonly eaten. Once the buds start to open, the shoots quickly turn woody.

Water makes up 93% of asparagus’s composition.

The shoots are prepared and served in a number of ways around the world, typically as an appetizer or vegetable side dish. In Asian-style cooking, asparagus is often stir-fried. It may also be quickly grilled on the barbeque, roasted in the oven with a little butter and garlic and is also used as an ingredient in some stews and soups. In recent years, asparagus eaten raw, as a salad ingredient has gained popularity.

Asparagus can also be pickled and stored for several years.

Green asparagus is eaten worldwide, though the availability of imports throughout the year has made it less of a delicacy than it once was. In Europe, however, the “asparagus season” is a highlight of the epicurean calendar.

White asparagus is very popular in most European countries. To cultivate white asparagus, the shoots are mounded with soil or sand as they grow. With no exposure to sunlight there is no photosynthesis and the shoots remain white. Compared to green asparagus, the locally cultivated so-called “white gold” or “edible ivory” asparagus, also referred to as “the royal vegetable” is believed to be less bitter and much tenderer. Freshness is imperative, and the lower ends of white asparagus must be peeled before cooking or raw consumption.

Purple asparagus differs from its green and white counterparts in having high sugar and low fiber levels. Purple asparagus was originally developed in Italy and commercialized under the variety name ‘Violetto d’ Albenga’. Since then, breeding work has continued in the United States and New Zealand.

In continental Europe, due to the short growing season and demand for local produce, asparagus commands a premium price.

Asparagus is low in calories and boasts tons of nutritional ingredients like folic acid, an essential vitamin for pregnant and nursing women. A source of fibre, vitamins A and C and many minerals, asparagus also provides antioxidants that may help our body prevent the risk of many diseases like some cancers and cardiovascular diseases.

Since asparagus often originates in maritime habitats, it thrives in soils that are too saline for normal weeds to grow. A little salt was traditionally used to suppress weeds in beds used solely for asparagus; this has the drawback that the soil cannot be used for anything else. Some areas are better for growing asparagus than others. The fertility of the soil is a large factor. Winter is the best time for planting “Crowns”, and the first shoots appear in spring.

Asparagus spears are normally cut at or just below the soil surface when the emerged spear is about seven or eight inches long. In hot weather the spears start to fern out earlier and need to be cut at around five inches to maintain quality.

Asparagus spears can be either cut or snapped. The usual way is cutting, but care has to be taken to avoid damaging emerging spears. The base of a cut spear may have started to become tough; if the spear is snapped, it will naturally tend to break at the junction between the fleshy and the woody parts of the spear. Snapping is faster than cutting, but requires greater skill.

Here at Kato’s we grow three varieties of Asparagus

Mary Washington – which is one of the older and more commonly grown varieties, produces long green spears. Tastes great and has been the most popular asparagus in American gardens for over a century.

Jersey Knight – is an all-male variety of asparagus that offers cold hardiness and resistance to diseases such as root rot, rust and fusarium. This productive variety will give you impressive yields each and every year. Its extra-large, uniform, tender spears are good for fresh eating, cooking or making salads. Emerges as spears for harvest at desired thickness.