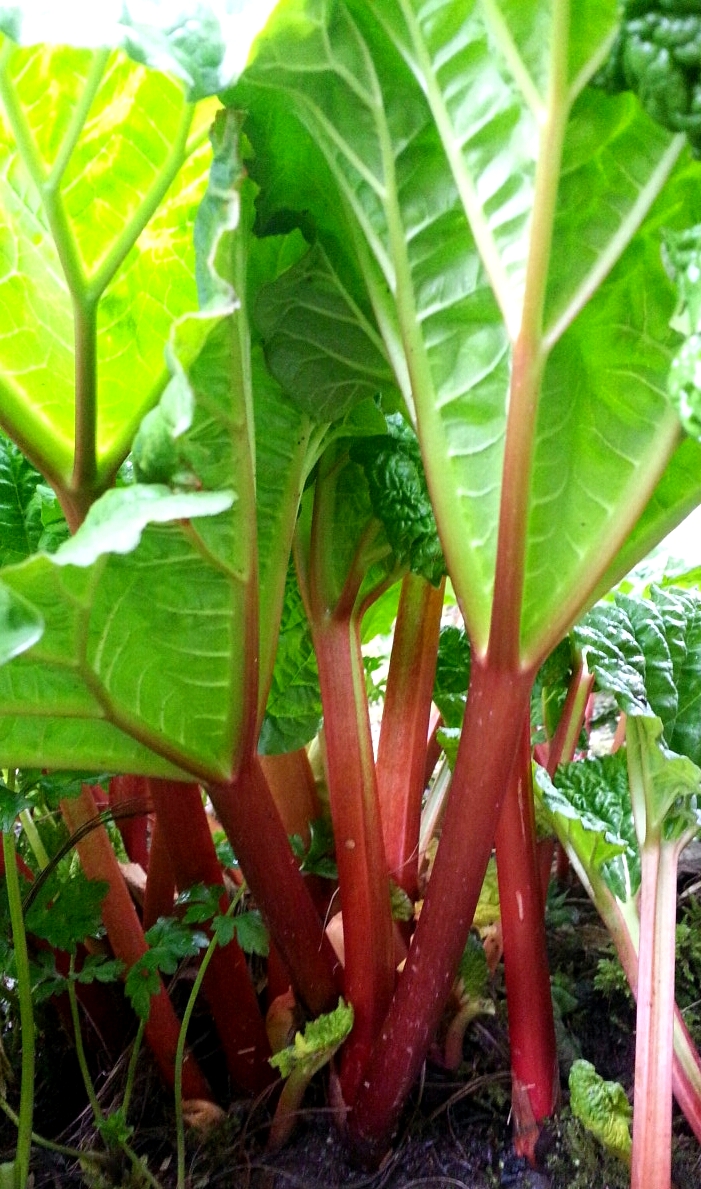 What could be more enjoyable than a fresh rhubarb pie or crisp on a glorious spring day.

With all things old becoming new again this fruit is gaining popularity in many home gardens once more.

Rhubarb is usually grown for its fleshy stems or petioles.  The use of rhubarb as food is relatively recent.  Its usage was first recorded in England in the 17th-century when sugar became affordable to the common people.

Commonly, it is stewed with sugar or used in pies and desserts, but it can also be put into savory dishes or pickled. Rhubarb can be dehydrated and infused with fruit juice to make a fruit candy or leather.

In former days, a common and inexpensive treat for children was a tender stick of rhubarb, dipped in sugar. It is still eaten this way in many parts of the world.

Rhubarb can be also be used to make rhubarb wine or sima (aka mead) as well as compotes, jams and jellies.

You’ve heard of champagne blond, strawberry blond, and honey blond. Since we are coming into rhubarb season here, let us introduce the Rhubarb Blond.

One of the more intriguing uses for the root of this ancient plant is as a lightening agent for blond or light brown hair. The oxalic acid serves as a fixative, so a rhubarb rinse will last much longer than most herbal rinses.  Be careful though as the roots and leaves are poisonous.

Studies have been conducted where a pigment found in rhubarb has killed or slowed the growth of cancer cells in mice.

Rhubarb leaves can be used in honey bee hives as a mild Varroa-cide, either as crushed leaves or in the form of a tea. Rhubarb tea soaked paper towels or crushed leaves can be placed above the brood nest. Worker bees instantly begin removing this alien substance, exposing the hive to oxalic acid in the process. The oxalic acid is toxic to Varroa mites and mite populations decline while these rhubarb remedies are on the hive.

Rhubarb is commonly grown; with greenhouse production is readily available much of the year. Rhubarb grown in greenhouses is generally called “hothouse rhubarb”. Typically it is available in early spring at most grocery stores before outdoor cultivated rhubarb is available. Hothouse rhubarb is usually brighter red, tender and sweeter-tasting than outdoor grown rhubarb.  In temperate conditions, rhubarb is one of the first food plants harvested usually in mid-to-late spring Rhubarb is ready to consume as soon as harvested and freshly cut stalks are firm and glossy.

In England the first rhubarb of the year produced in forcing sheds and harvested by candlelight where all other light is excluded.   This custom produces a sweeter, tenderer stalk.

Rhubarb thrives in areas of direct sunlight and can successfully be planted in containers if they are large enough to accommodate a season’s growth.

Rhubarb damaged by severe cold should not be eaten, as it may be high in oxalic acid which migrates from the leaves and can cause illness.

Here at Kato’s Nursery we carry the variety “Strawberry Red” which is a heavy producer of large stalks which are rosy-red inside and out.

So dust off your shovel and get out there and plant some rhubarb.